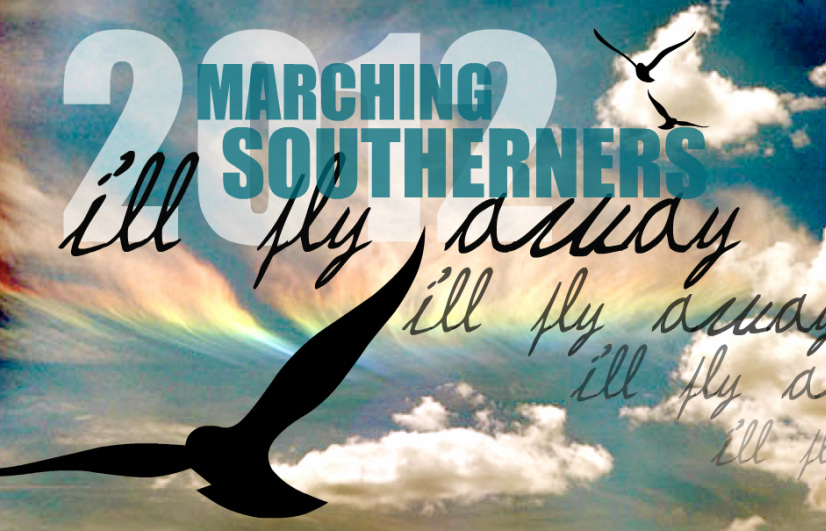 The Marching Southerners begin year number fifty-six with their eyes to the skies! I’LL FLY AWAY is a musical journey that explores the magic and wonder that lies beyond the clouds, through the sky, and in the heavens above.

The 2012 production opens in powerful style with Flight, a collage of selections from Michael Giacchino’s score to Star Trek and Paul Lovatt-Cooper’s Enter The Galaxies. Hold on to your seats as the countdown to takeoff winds down, and the Southerners’ hornline soars into the realms of outer space. Dark, symphonic impacts and whirling flourishes in both woodwinds and brass highlight this exciting opener!

Van Morrison’s Moondance is given a classic Southerners’ big-band treatment as the Ballerinas take center stage. Smooth grooves and burning riffs build to a classic kickline with Bart Howard’s Fly Me To The Moon. This popular standard immortalized by Frank Sinatra rounds out the coolest…and hottest…Ballerina feature yet!

The spirit of Albert E. Brumley’s I’ll Fly Away has long been an enduring Southerners tradition. This classic hymn is finally brought to the marching field in a lush arrangement with smooth, contemporary harmonies and subtle gospel inflections. Tender solos layer with ensemble entrances as the Southerners fly beyond the clouds and wash the audience in waves of sound with Harold Arlen’s Over The Rainbow. This timeless melody and the unmatched musicianship of the Marching Southerners takes us back to that land that we heard of…once in a lullaby…

The 2012 production concludes high in the western sky with Stephen Schwartz’s Defying Gravity. This enduring favorite from the hit musical Wicked finds new life in a driving, pop setting. A classic Southerners percussion feature then gives way to a “kitchen sink” ending unlike any to date. Recaps of themes, blistering horn riffs, and jaw-dropping drill bring the show to a close…but will leave you wanting more.

Sit back and enjoy the ride…Hallelujah, by and by, with the JSU Marching Southerners’ 2012 Production, I’LL FLY AWAY!